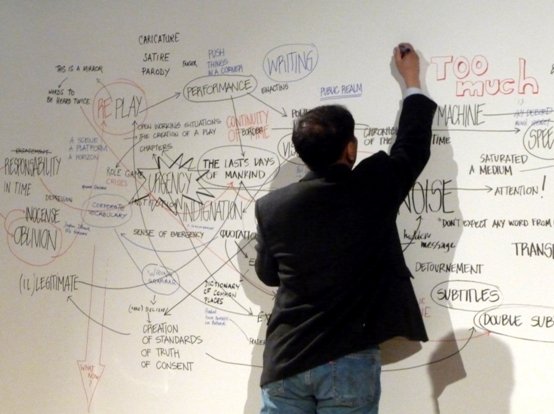 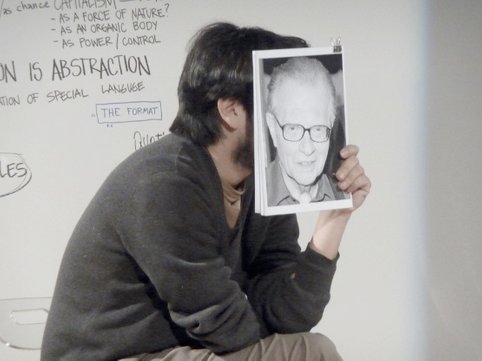 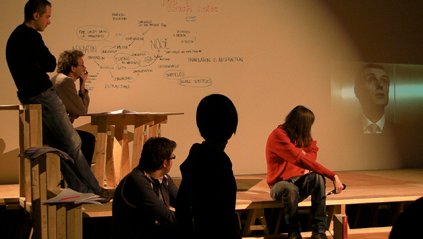 AFTER THE LAST DAYS OF MANKIND

“After the Last Days of Mankind” at the Nam June Paik Art Center, was a research-as-workshop situation, during the exhibition "Now Jump" the first step in the conception of a new large-scale exhibition based on the legacy and the topicality of Karl Kraus’ writing techniques, and especially his use of quotes to dissect forms of dominant languages. Conceived by castillo/corrales, the workshop involved four guest collaborators: artists Erick Beltran and Joachim Hamou, Nicolas Perge, and curator and writer Cosmin Costinas.

A writer, polemist, and satirist from Vienna, Karl Kraus (1874-1936) was one of the most prominent intellectual figures of his time. Kraus spent a large part of his life fighting hypocrisy in Viennese society and most of his writings and legendary public readings reflected his concerns about the misuse of language, about the media’s distorted coverage of war and its subsequent manipulation by those in power. He did so through his position as editor and publisher of Die Fackel (The Torch), a completely independent, self-funded, newspaper which Kraus founded in 1899 and lasted until his death in 1936.

The first chapter of The Last Days of Mankind appeared in Die Fackel on October 5, 1915. Developed until 1922, The Last Days of Mankind chronicles the development of the war through the daily and faithful quotation of “voices and rumors,” of street conversations, newspaper headlines, official speeches, and military reports. It is constructed as an assemblage of vignettes from the front, the city, the political headquarters, private homes, clinics, playgrounds, stores, and cafés. The repeated appearances of commentator, “the grumbler”, and that of a newsboy shouting the latest and worsening news about the war, set the rhythm to the entire piece.

Kraus’ dissection of language with his recorder-like pen, is used as the main reference for this workshop designed as an examination of our contemporary language condition, of the naturalized dominant languages of media, finance, politics and contemporary art today.

The workshop participants gathered for ten days, bringing along their personal archives of what constitutes the insufferable, overheard, words, sentences, rhetoric, ideas, that fabricate the noise around us today, as Kraus would say:

“Expect no words of my own from me. Nor would I be able to say anything new, for in the room in which one writes there is such noise, and at this time one should not determine whether it comes from animals, from children, or merely from mortars. He who encourages deeds with words desecrates words and deeds and is doubly despicable. This occupation is not extinct. Those who have nothing to say because actions are speaking continue to talk. Let him who has something to say come forward and be silent!" (Karl Kraus, “In these great times”, 1914)

The workshop involved group discussions, collective writing sessions as well as daily public addresses in the form of exposés, conversations, performances and presentations of material (newspaper texts, sociological essays, etc) and artists works. The latter are chosen through a first, open, reflection about artworks that could be situated in the legacy of Kraus, in the sense that they use the same creative modes as Kraus; namely a). indignation b). literality, and the use of "acoustic quotes" c). the sense of absolute responsibility. These works include pieces by Paul Chan, Guy Debord, Stephan Dillemuth, Andrea Fraser, Andrea Geyer, Melanie Gilligan, Sharon Hayes, Ashley Hunt, Nils Norman, Katya Sander, Joe Scanlan, Christoph Schlingensief, Alain Séchas, David Thorne, and René Vienet, among others.