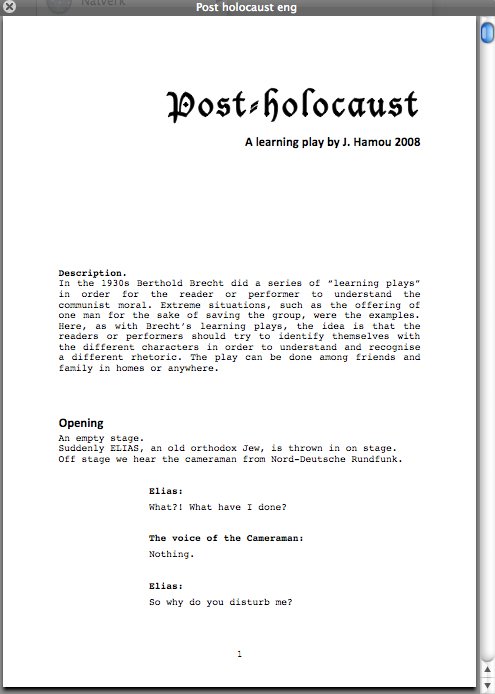 Post Holocaust is the result of a trip taken in 2008 to Israel and Palestine. My original idea was to film a meeting between an Israeli and a Palestinian, but it seemed to me that every inch of the conflict had been documented and I decided to focus on having a simple dialog with people in Ramallah and Tel Aviv.

By privileging a common conversation and not using a camera, more honest conversations ensued with people living in both places. I met with people to discuss everyday problems, which took the project deeper into the midst of the true cultural conflicts. Can homosexual relationships between a Jew and a Palestinian work? What is the status of non-Jewish immigrants in Israel such as African or Asian people?

During the time spent talking to people about these issues, the idea arose to transcribe some of the conversations and create a script so that the words of the people could be turned into a "learning play" and possibly staged in the future.

In the 1930s Berthold Brecht wrote a series of “learning plays” in order for the reader or performer to understand the communist moral. Extreme situations, such as the offering of one man for the sake of saving a group, are examples.

Here, as with Brecht’s learning plays, the idea is that the readers or performers will end up identifying with the different characters in order to understand and recognize a different rhetoric. The play can be done among friends and family in homes or anywhere.