In 2004 the alternative local TV station tv-tv was created. The idea was to make TV-media a true public space. A lot of experiences were made in form and content. tv-tv inherited the station from tv-stop that had produce alternative and activist tv for 15 years. Hereunder are some examples (by many) that I was part of. Eventually this archive will grow as more productions are found. More productions can also be seen under the FFF project.

Day 1 tv-tv
First day of tv-tv was a montage about our coming activities. The main narrative is a guided tour at the national Danish TV station (DR). The program was only aired once since the national tv didn't approve of there tours being transmitted. The director and graphic designer Jonas Wagner made a crash-corse in elementary techniques of tv-production.

om-om
om-om (about-about) was a program concept for tv-tv that I came up with but only did two versions of. The idea was to make a program about a specific project with one or many creators of that project.

Ray Krill is an american film maker that lived in Holland at the time (2005). In the late 70th he made a great film on the liberation of Guyana from British colonialism. The film is called The Terror And The Time and is shown directly after the interview (25 min into the program)

The other om-om was done with artist Amel Ibrahimovic coming back from a Hajj (pilgrim to Mecca). Amel had filmed a lot from the tour he did with his grand parents and he made a very informative and personal reconstruction of the trip. Unfortunately it became too personal for Amel and he asked for it not to be shown again.

"zarko et la culture" tv-tv paris 2007
4 camera teams from tv-tv attend Nicolas Sarkozy's "talk to the culture" during the presidential campaign 2007. tv-tv was participating in the shoe "société anonyme" curated by Thomas Boutoux, Nataša Petrešin and François Piron at Le Plateau and was producing tv for a local tv-station in Paris. This was one of the contributions. Here are some more information on the société anonyme show (that also was the beginning of my collaboration with castillo/corrales)

tv-tv space Relax-Space was meant to be a pause in the zapping, like a physical space in the public TV-space. The blue monochrome has many artistic references, but it also refers to the colour the TV-set itself produce at night.The soundscape is a montage from to many sources to be mentioned here. Strangely the program was met with a lot of controversy and complaints from viewers who thought TV is about imagery.

During the years of tv-tv we were invited to several exhibition. Here are some installation pictures from Kunstinstituut Melly (former Witte de With) in the exhibition Satelite of love (2006) 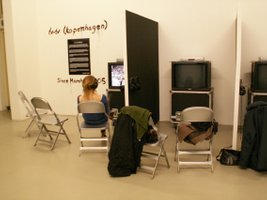 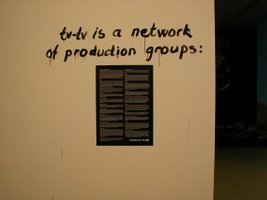 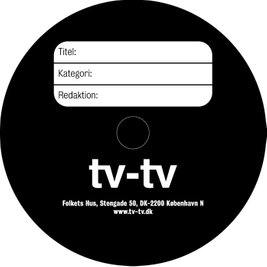 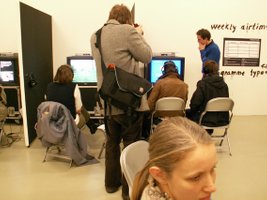 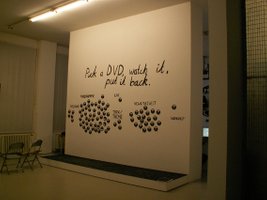 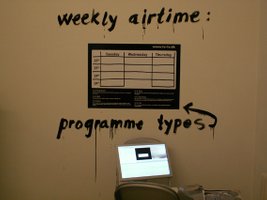 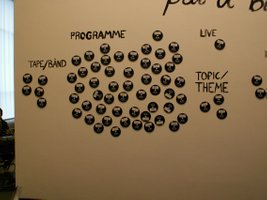