Sitcom was also a format I wanted to elaborate upon. I had investigated the industrial production methods and decided to work under similar conditions. That meant a long writing period in collaboration especially with Niels Fonseca. We timed the scenario as precisely as possible. The recording was done with two cameras in one go. Then we had a lunch-break before doing the whole thing one more time. At the end of the day there were a few catch up and two or three location scenes outside the set. The set was built following the principle of having as many entry's as possible and having a slight height difference between the background and foreground.

The cast was made up of some actors, a reality TV-star a curator and writers and artist, most of them still active today and then there was the special of the band "drug shop" that in reality was called Love Shop.

The whole sitcom was done for the exhibition at the Louisiana Museum of Modern art in Denmark who had invited to the specific exhibition investigating the local art-scene in of south Sweden and Denmark. The sitcom was therefore playing on the specific art-student situation in Copenhagen that was filled with Swedes and Danes slowly coming to understand just how profound their differences really are...
In the exhibition the floor of the room was covered with the same carpet that covered the floor of the scenography of the sitcom.

A slight polemic came out of the use of publicity spots that I sold in order to be able to pay the production. I contacted a publicity company that made an estimate of the price and reached out to some of their clients. For me it was not only a way to finance the production but also a way of creating some sort of hyper naturalism. I wanted people to think about the whole art scene in Copenhagen as a potential sitcom 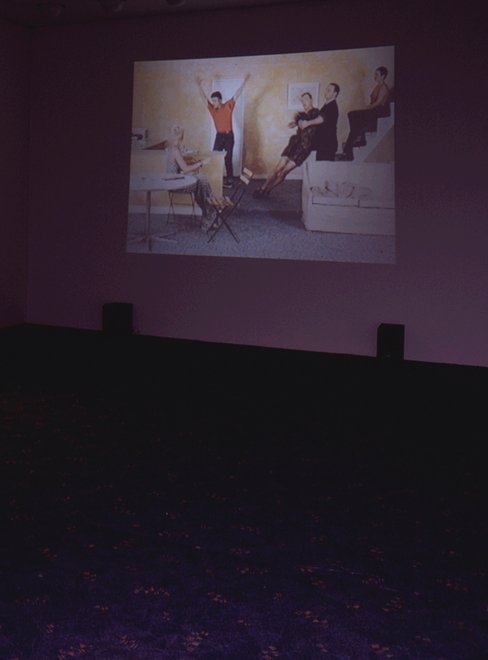